KOA Speer Fundamentals of a Resistor

What is a Resistor?

Ohm’s law states that the current through a conductor between two points is directly proportional to the voltage across the two points.
Stated another way, Ohm’s Law means voltage = current x resistance.

If the voltage is E and the current is I, the following relationship holds.

"R" represents the coefficient of proportionality and is called resistance (electrical resistance). It is the quantity symbol and Ω (ohm) is the unit symbol. The circuit symbol is as shown in the following figure.

When the electrical resistance is high, it is difficult for the current to flow, and when the electrical resistance is low, it is easy for the current to flow. Using this phenomenon, the resistor, as an electronic component, provides constant current flow through a circuit or current adjustment as needed. Resistors are also used to reduce or divide voltage.

Therefore, resistors along with capacitors and inductors (coil) are the major passive components, which are essential basic components for electronic circuits.

Construction of a Resistor

Resistors are basically constructed using four elements – a base substrate, resistive element, terminal and a coating.

Alumina-based insulators are the most commonly used base substrate. Materials suitable for the application are selected as the base substrate of the resistor (Based on thermal conductivity, thermal expansion coefficient, mechanical strength, etc.).

The electrical resistance of the conductor is given by the following formula.

Terminal:
Electrically and mechanically connects the resistor and the board (circuit pattern).

The electrical connection point of the resistor, where voltage and current are applied. The structure and material are configured so that it does not affect the characteristics of the resistor.

Select a resistor with a terminal structure and shape suitable for the mounting method. Surface mount components (SMD) are now the mainstream in order to improve the mounting density and reduce the mounting cost.

Coating:
Protects the resistive element and base substrate from the ambient air and mechanical stress 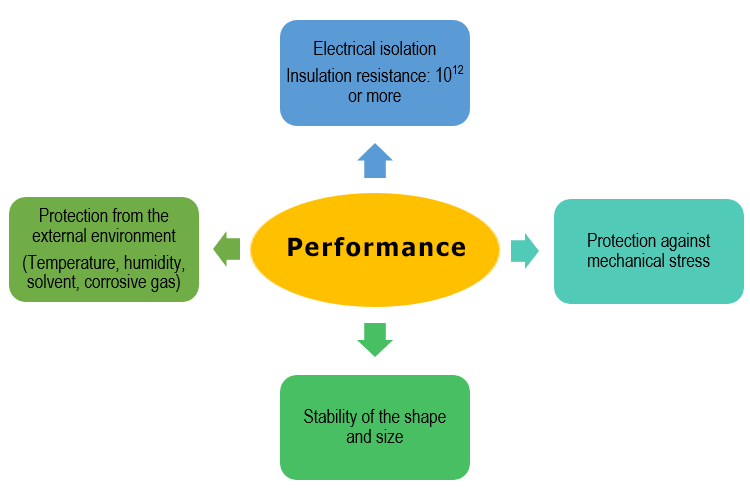 There are various classifications or types of resistors depending on the combination of function, shape, resistive material, and application.

Categorized by function, there are three types of resistors:

It is important to select an optimal combination out of available options according to the purpose of the application when selecting a resistor. 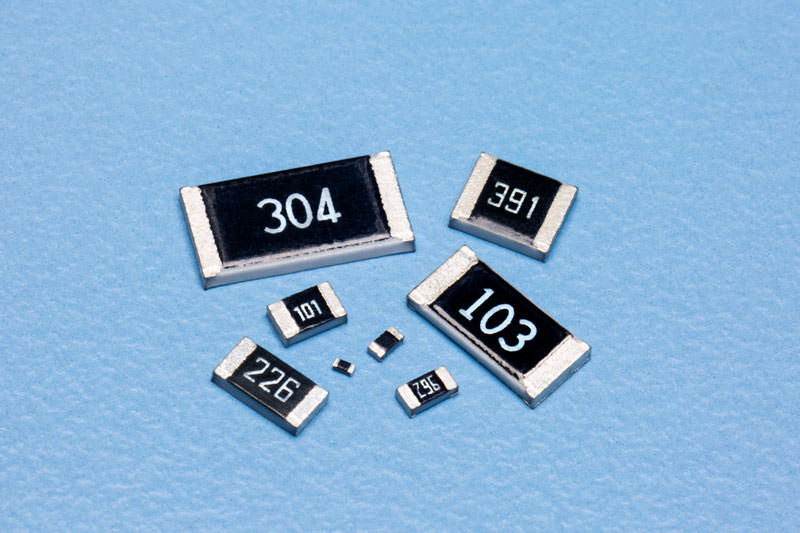 Resistors with terminals that have been treated for soldering or bonding and do not have terminal wires (lead wires). They can be divided into rectangular type and cylindrical type. Five types depending on the resistive material are shown below.

Cylindrical Chip Fixed Resistors
Commonly known as MELF (Metal Electrode Leadless Face), a type of chip resistor with a structure of a general type axial lead resistor without the lead wire but with the metal plated cap attached to the electrodes at both ends. Its cylindrical shape and metal cap eliminate the concept of front and back, give excellent electrode and mechanical strength, and have precise structural dimension that achieves high precision in supplying and mounting of resistors. In addition, the metal film type is excellent in the resistance accuracy, T.C.R., and suppressing current noise.

Resistor networks in which two or more resistive elements are integrated and combined on an insulating substrate to form a single electronic component. Each element can be connected as necessary. An array is simply a continuous integration of resistors with two electrodes, while a network is an integration of formed circuit. The main applications are pull-up and pull-down resistors for digital circuits.

In the 1980s, when the production of carbon film resistors was the mainstay, the production volume of SIP type drastically increased to support high-density mounting. However, in the 1990s as mounting technology took a change to surface mounting, chip network resistors began to be used. In the past, network resistors were often used around logic ICs and parallel ports for I/O, but since the processing by microcomputers and use of serial buses for I/O have progressed, the demand of network resistors has been declining significantly. 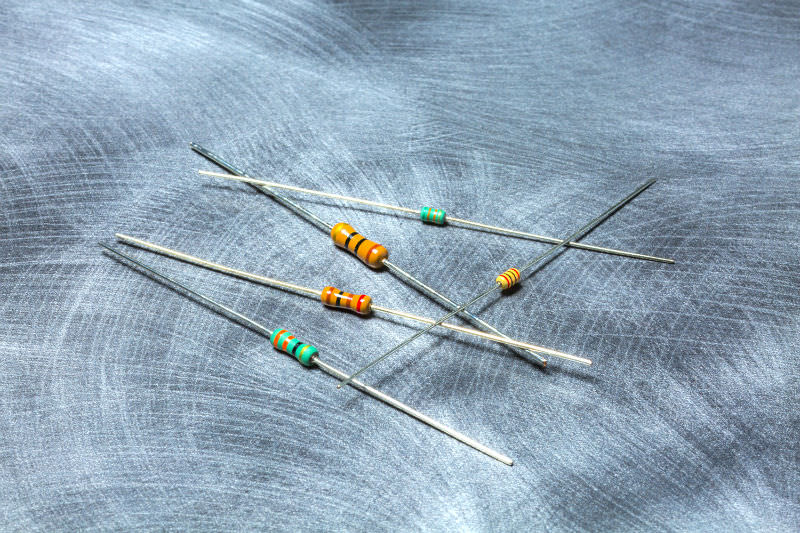 Carbon Film Fixed Resistors
Fixed resistors with excellent pulse resistance that use a carbon film as a resistive element, and have long been the most popular resistor. In terms of electric power, 1/4 W and 1/2 W types are the most common in the marketplace. Small types such as 1/4W type of 3.2 mm x 1.9 mm size and 1/2 W type of 6.3 mm x 2.85 mm size are mainstream and widely used as general-purpose products.

Metal Oxide Film Fixed Resistors
Fixed resistors with a metal oxide film as a resistive element, which provides high power rating in a small size (the smallest volume per rated power among all the resistors), and an excellent heat resistance. Low T.C.R. is achievable at a lower cost compared to power type metal film resistors. The main application is power supply circuit.

Fixed resistors with a metal resistive wire as a resistive element. It has excellent pulse resistance and heat resistance. Its low T.C.R. achieves the low current noise. On the other hand, it is difficult to obtain a high resistance value, and the winding structure makes it unsuitable for high-frequency circuits. Wirewound resistors are mainly used as a pre-charge resistor in power supply circuits. These resistors with low resistance are used for current sensing.

Reference:
・Almanac of Electronic Components 2019 (publicated by Chunichi-sha)
・Statistical data by "Ministry of Economy, Trade and Industry" in Japan

Nominal Resistance
Designed resistance value usually indicated on the resistor.
Power Rating
Maximum allowable power at rated temperature. Some of our chip resistor arrays and networks specify the power rating for the entire package, as opposed to each element.
Rated Ambient Temperature
Maximum ambient temperature at which the power rating may be applied continuously. The rated ambient temperature refers to the temperature around the resistor mounted inside the equipment, not to the air temperature outside the equipment.
Rated Terminal Part Temperature
Maximum terminal part temperature of the surface mount resistor at which the power rating may be applied continuously. Includes the temperature rise by self-heat generation.
Derating Curve
Curve that expresses the relation between ambient temperature or terminal part temperature and the maximum allowable power, which is generally expressed in percentage.
Rated Voltage
Maximum allowable D.C. or A.C. voltage, to be continuously applied to a resistor or a resistor element.
Rated Voltage (V) = √Rated Power (W) X Nominal Resistance Value (Ω)
Rated voltage shall be the calculated value or max. working voltage, whichever is lower.
Critical Resistance
The maximum nominal resistance value at which the rated power can be applied without exceeding the maximum working voltage. The rated voltage is equal to the max. working voltage at the critical resistance value.
Max. Working Voltage
Maximum D.C. or A.C. voltage (rms) that can be continuously applied to the terminations of a resistor. However, the maximum value of the applicable voltage is the rated voltage at the critical resistance value or lower.
Maximum working voltage and rated voltage are calculated D.C. voltage based on rated power. Sine wave is assumed for the A.C. voltage so the peak voltage should be √2 times the maximum working voltage. When the waveform is not a sine wave, or when the resistance value exceeds the critical resistance, please contact us for the applicable peak voltage.
Overload Voltage
Allowable voltage which is applied for 5 sec. according to the short time overload test. Overload voltage shall be 2.5 times of rated voltage or max. overload voltage, whichever is lower
Maximum Overload Voltage
Largest value of overload voltage 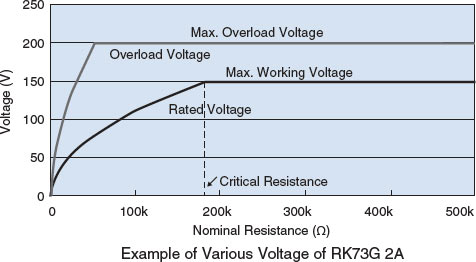